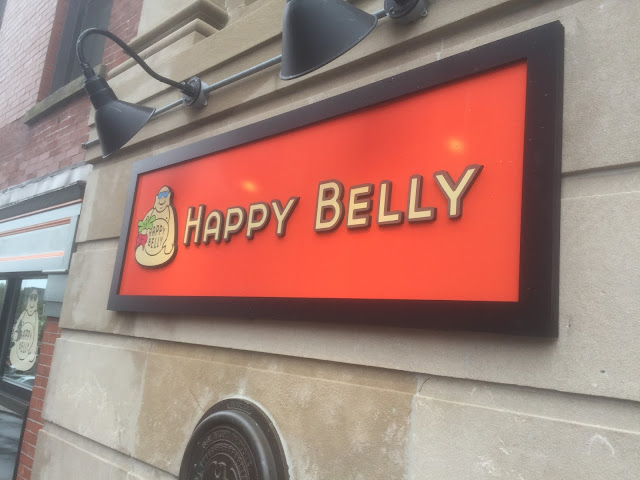 On the corner of Duncan and Main in downtown Gloucester sits an eatery inside of an impressive brick and stone edifice that was once a bank - one of the oldest, coolest, historical buildings in our city.  The location has been the keystone of conscientious cuisine for decades. Opening as the Glass Sailboat in 1975, the venue once sold, oddly enough, stereo equipment and bulk foods. The Sailboat's founder, Mac Bell, named the cafe for a stained glass window hanging won at a carnival. This glass boat hung in the window of the cafe for it's nearly thirty years of operation. The selection of wares for sale was far more methodical than it might seem. Young, hip, hippie Mac simply wanted to get wholesale pricing on things that were important to him as a consumer, so he set up his shop.

Over the course of time, The Sailboat evolved to include a full service cafe with a salad bar, the best pastries (that cheddar bread, though), sandwiches, coffee, groceries and vitamins and eventually a second location with skincare, clothing and jewelry - providing wholesome, homemade and environmentally responsible goods to Gloucester's crunchiest customers. The cafe was also a local favorite lunch and meeting spot for court employees and cops at the station across the street, a kind of ironic twist on the cops in the donut shop story, and to a whole host of local musicians, artists and oddballs.

I worked at the Sailboat through college on summer and winter breaks. I still connect with my Sailboat clan because, although is was just a silly kid retail job, the impact it had on all of us was real and lasting. Mac and Annie ( God I did love her) and their family welcomed us all into our homes, never made us feel like silly kids and valued us all as people - people who would inherit this community and do great things. I'm proud to say, most of my GSB crewmates are doing just that.


My Sailbot years were a formative time in my life and my exposure to the scene at the Sailboat was my first real connection to the idea that a community that breaks bread together stays together. Bustling with business people and babies, musicians and architects, the Sailboat was more than a cafe, it was an entity in and of itself, a living, breathing, soulful, warm microcosm of love, of nourishment, of all the things that made a body feel good.

When, upon the passing of the beautiful Annie Bell, Mac finally gave up the Sailboat for his many other enterprises, new owners, Sean and Valerie Colins and Tadgh Morgan, former Newbury Street juice bar owners and avid surfers-turned Cape Ann residents opened the Sunny Day Cafe, a similarly hip hippie eatery that continued that tradition of building community around food. Sunny Day fostered the welcoming atmosphere of the Sailboat, hosting a colorful cast of characters, often those who might not be welcome elsewhere for their eccentricities and their poor economic plight. . The Sunny Day was a hub for all the people on this island seeking nourishment, a warm spot to escape the harsh winters, and the feeling of belonging.

You see, 3 Duncan St is an inclusive place. It is the place where Tadgh met his bride, Paula, a love story shared with me by Peg Leeco, one of Sunny Day's bakers. "When she came in, Sean would run in the back and get Tadgh a fresh apron and tell him she was here. Their love story literally unfolded in front of us all at Sunny Day."

That's the reality of how 3 Duncan St marks a person. It's a melting pot and a place where whoever you are, whatever you are, you belong. And that's the magnet and the chemistry that draws you back again and again. It's alchemical.

And, speaking of chemistry, another important match was struck at 3 Duncan Street - one between chef, Jeff Cala and entrepreneur, Mark McDonough. It was at the Sunny Day that the pair met and began the partnership that would become Serenitee Restaurant Group.

As the Morgan and Colins tribes grew and operating the Sunny Day became no longer realistic, the ownership team looked to sell.  The newly connected Cala and McDonough, speaking often of the perfection of this enterprise, offered to buy. And, after months of negotiation, a deal was struck and both Alchemy Bistro and Serenitee were born.

3 Duncan street has that magic. It just does. It's as though the building itself has a heart. The space envelopes a person with the warmth and familiarity of  a favorite sweater. I can't explain it. But if you have been in that space, I don't have to. You know.

So it's not surprising that, years later, I found myself working there again, this time as the AGM of Alchemy. Alchemy took the hippie eatery idea to a whole new level. It gave it polish. It gave it style. Alchemy is, by definition, the process of turning something ordinary into something extraordinary.  And Alchemy Bistro did just that. It was the coolest place to work and, like it's predecessors, it left a void when it closed. Always awesome, but always just not quite what Jeff and Mark wanted when they set out on this long, strange trip, they shut her down in 2015.

Fast forward to Spring 2017. After sitting shuttered for nearly two years, 3 Duncan Street is rising again as Happy Belly (and OMG the Buddah with Beets logo is rad). And I gotta say, it's even more exciting than I thought. Yeah, it really is.

Jeff invited me in for a sneak peak tour of the opening-in-early-June newest eatery to grace 3 Duncan. I was met by Melissa Hays, pastry chef who locals know from her days operating Sticky Fingers Bakery, a to-die-for gem of a pastry shop tucked inside the Brown's Mall for several years.

"Watch out for those pastries," Jeff warned me. "I'm going to be 300 pounds".  He wasn't joking. Melissa's sweets are lethal. 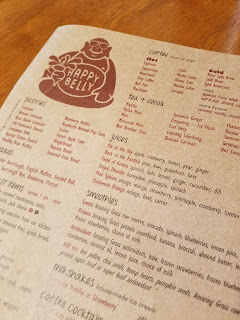 Fresh apple cake and cookies were laid out for my visit and a crisp copy of the new menu was provided for my reference.  Young Reese made me a honey latte and showed me the mac daddy tap system that will provide everything from cold brew coffee to batch cocktails to craft beer.  Executive Chef/GM Rhiannon Nowak pointed out the Zenith TV toy box that graces the brick room, a throwback to Mac's original offerings. Melissa beamed about the expo bakery and I was over the moon about the antique milk shake maker and the pretzel drying rack (pretzel and ice cream have the same kryptonic effect on me - I'm pretty sure my daughter is made up of ice cream and pretzels).

The cheery, excited staff of baristas and bakers enthusiastically illuminated the wealth of culinary toys that will be churning to life in a few short weeks to provide our community, once again, with the sumptuous treats we all so fondly remember from Sunny Day and Glass Sailboat days. Juices, breads, pastries, sandwiches, soups, nightly blue plate specials and even an afternoon snack selection round out a menu that blends the favorites of 3 Duncan streets best iterations.

I cannot wait to "belly up" to Happy Belly.

Happy Belly opens on June 8th. Get in there and get belly happy.


Posted by Jennifer Amero at 10:55 AM No comments: Links to this post