Holiday Family Theater at The Larcom - so much good, clean fun

Posted by Jennifer Amero at 7:25 AM No comments: Links to this post

Funk Fest is Back - Beverly Music Bonanza is Bigger and Better! 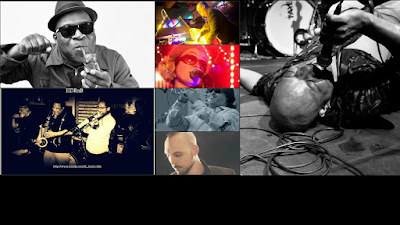 Sharing this press release from Seth McNally at M.E. Productions about the hottest, hippest night of music this year. Get your tickets to the 2nd Annual Beverly Funk and Blues Festival and dance off that Thanksgiving Turkey with some groovy music guaranteed to make you "shake everything you got".  The lineup includes some of my very favorite people, both on
and off stage, folks like John Iltis, Brandon Tarricone, Henley Douglas, Jr.,and Dennis Monagle who are some of the coolest cats I know. Most of these guys play in several bands, so even if you don't know them by name, you have probably heard them rock out nasty good music in local bands like Krewe de Groove, Safe Ty, GrooveTherapy,The Peter Fedele Trio and so many more. The event is sponsored by Salem Jazz and Soul Festival .

The show is on Saturday, November 28th at the Historic Cabot Theater in Beverly,MA formerly the home of Le Grand David Magic Show, and now reborn as a nonprofit entertainment complex.  DUDE - if it's anything like last year, which was JAM PACKED with tunes, I'd HIT THIS LINK NOW for tickets.

Here's the 411, plus some video links to some of the musicians. Give a look and listen, and then get your seat. This is big...

Last year's Funk Fest was off the hook, so we decided to make it an annual show!  We brought together the best musicians & coolest cats in Boston's Funk scene for a Monster show; Barrence Whitfield, HDRnB w/ Phunky guests, & Qwill...

Beverly's own local hero and international icon, BARRENCE WHITFIELD is putting together a rockin' set with The Grits & Groceries Orchestra. Winner of seven Boston music awards, Barrence is a full-throttle soul screamer in the spirit of Little Richard, Wilson Pickett and Solomon Burke.  He has been described as the owner of one incredible pair of lungs, with limitless energy and unmatched enthusiasm for his music and his audience. For the better part of two decades, Whitfield has sustained that energy, bringing his yowling brand of classic and roots rock ’n’ roll from New England’s working-class stages to the summer festivals of Europe and Japan with a rotating cast of backing musicians.

QWILL aka Jesse Ciarmataro: Singer, songwriter, multi-instrumentalist, and producer currently based in Salem. He is putting together a live band that will open the night with music that fuses a wide spectrum of influences from Soul, Modern Jazz, Hip Hop, Roots, and Rock.

The 7th Annual Taste of Cape Ann was, without question, the biggest, best foodie fest north of Boston yet. Proceeds benefit Cape Ann YMCA's Service Trips and Initiatives for Teens.  My daughter is a Teen Leader now. My nephews were before her. I've been involved since the first year, when my now 20 year old nephew, Dominic went to New Orleans after Hurricane Katrina with the group. This is an important event for great kids doing important work. This year we broke another record. Over 300 guests attended and dined on the most interesting mix of local cuisine we've had since it all began. At a family friendly ticket price of only $25 a head, we made over $8,500.
Newcomer Sea Glass at Castle Manor, who's chef Nick Peters was a season 14 Hell's Kitchen contender, making it to #5 before he got cut, went big with Duck Confit and Butternut Squash Arancini,  Lobster Bisque and Pumpkin Munchkins with creme Anglais.

Also new this year was Manchester-by-the-sea culinary hot spot, Foreign Affairs Bistro who came in big with Bluefin Pate Crostini. Magnolia 525 Tavern was also a first timer. Their Roasted Free Range Chicken, root veggies and kale did not disappoint. And I hear the Amaretto Spice Cake was the bomb - I never got back for sweets. Speaking of sweets, Cake Ann joined us, as well, and man oh man am I glad she did. If you missed her at the Taste, don't cry. She's opening her own space in The Common soon.

New in the hydration department this year was Wachusset Brewing with their Boston sports inspired cans of solid local liquid and Emory Vodka, who created 4 different signature cocktails from their locally made spirits.

Changes to promotion this year included leaking the menus as chefs committed their contributions, which I think resulted in a noticeable leap towards haute cuisine in the overall menus. The competitive nature of chefs seemed to kick a little bit of "Bring it On" into the scene and with each menu announced came another, more elevated announcement.

Regulars like Mile MarkeMile Marker 1 upped their game with the addition of Pain Killer cocktails to their food offerings and Jalapenos bringing Dos Equis to wash down terrific tamales. The general buzz was that this was the night of the culinary A GAME, but I think the pictures speak for themselves.

This is my favorite non-holiday event of the year, especially now that I'm out of the foodie marketing business. My agency job doesn't require photographing sushi or tasting wine, so this is a project I anticipate like Christmas. Nothing brings me more joy than organizing and networking, securing restaurants and promoting the event in social and in the press and I will do it FOREVER if they'll let me. And I'm good at it. At least, it seems that way. And with YMCA Executive Director and friend, Rick Doucette as my event partner, it's a piece of cake!


Posted by Jennifer Amero at 5:54 PM No comments: Links to this post

Today I'm giving a special shout out to my boy, Brendan Pelley who was our snarky, quirky Cure-listening, super talented sous in my Alchemy Bistro days. His spin was super creative, almost zany and yet perfectly balanced and beautiful. It was a great time at Alchemy, with Brendan in checks. 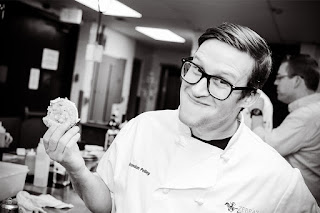 I left Alchemy to become DOM for the restaurant group (Serenitee) and Brendan soon moved on from the group and back towards his hometown, landing a spot at the helm of Zebra's Bistro in Medfield where he has been Executive Chef for the past few years.  While at Zebra's, Brendan did his time in Hell's Kitchen where he competed for the win under the (terrifying) Gordon Ramsay. He didn't win the game, but he definitely won the spotlight in the Boston restaurant scene as a result.
After a recent trip with his new bride to the land of olives and Ouzo, Brendan left Zebra's to start a pop up Greek concept, Pelekasis, which is making a lot of noise already. His next event, "Pelekasis at Commonwealth" is on Monday, November 16th. Thereafter, he turns up at Wink and Nod where he plans to dazzle diners with dolmas throughout 2016.  Opa! 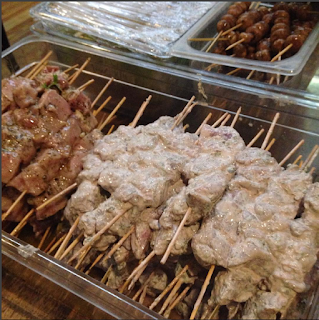