Get Your Dixie Funk Boogie On

Beverly, MA. M.E. Productions is excited to present The New Orleans Suspects with Little Feat’s Paul Barrere and Fred Tackett at the Larcom Theatre on Saturday, April 11th at 8pm. The Suspects are known as a NOLA supergroup, and Barrere & Tackett as multi instrumental jam pioneers. The night will culminate with a full set of the music of Little Feat. Tickets for this concert start at $35.


Music of the Big Easy. It’s as American as apple pie--and rock ‘n roll itself. It transcends boundaries, a freewheeling fusion of California rock, Dixie-inflected roots, and country-fried funk and boogie. For one night only, New Orleans Suspects will join forces with Paul Barrere and Fred Tackett of Little Feat. Don't miss a rare and intimate show with the men who continue to bring you Little Feat(on an ‘ indefinite hiatus’), and a NOLA superband. Yep, we said it…superband.


The New Orleans Suspects formed in summer of 2011 in the wake of the breakup of The Radiators after 34 years. The band comprises some of the best, most highly respected players in New Orleans.


The night will begin with a set from Barrere & Tackett, then The New Orleans Suspects will perform a full set of their own material. If that wasn't enough, the two groups will join forces at the end of the night for a crowd pleasing set of Little Feat tunes.


“We have so many great shows on the North Shore…but we’re pretty excited about this one. It’s going to be FUN,” say Seth McNally of M.E. Productions. “If you like New Orleans music, or Little Feat, mark your calendar.”


Tickets to see NOLA Suspects with Barrere and Tackett are $30, $35, and $40 for premier seating.

Posted by Jennifer Amero at 10:00 AM No comments: Links to this post

Can Your Kid Cook, Like REALLY Cook? Rachel Ray may need an introduction

One of the things I like most about writing this little blog is all the super cool stuff that PR agents and casting agents and restaurateurs and music promoters and designers share with me to share with you. I have wanted to be in the thick of the new, hot and hip since I was a little kid. That's why I do this.

This recent message from Danielle at Jen's Casting (a sweet group that handles so many of my favorite shows on HGTV and Food Network and such) is particularly cool and if you think you might be raising a future James Beard award winner, I'd get in on this. Read on:

-------
Rachael Ray is in search of the most talented kid chefs in the country for Rachael Ray’s Kids Cook-Off, Food Network’s exciting culinary reality series. 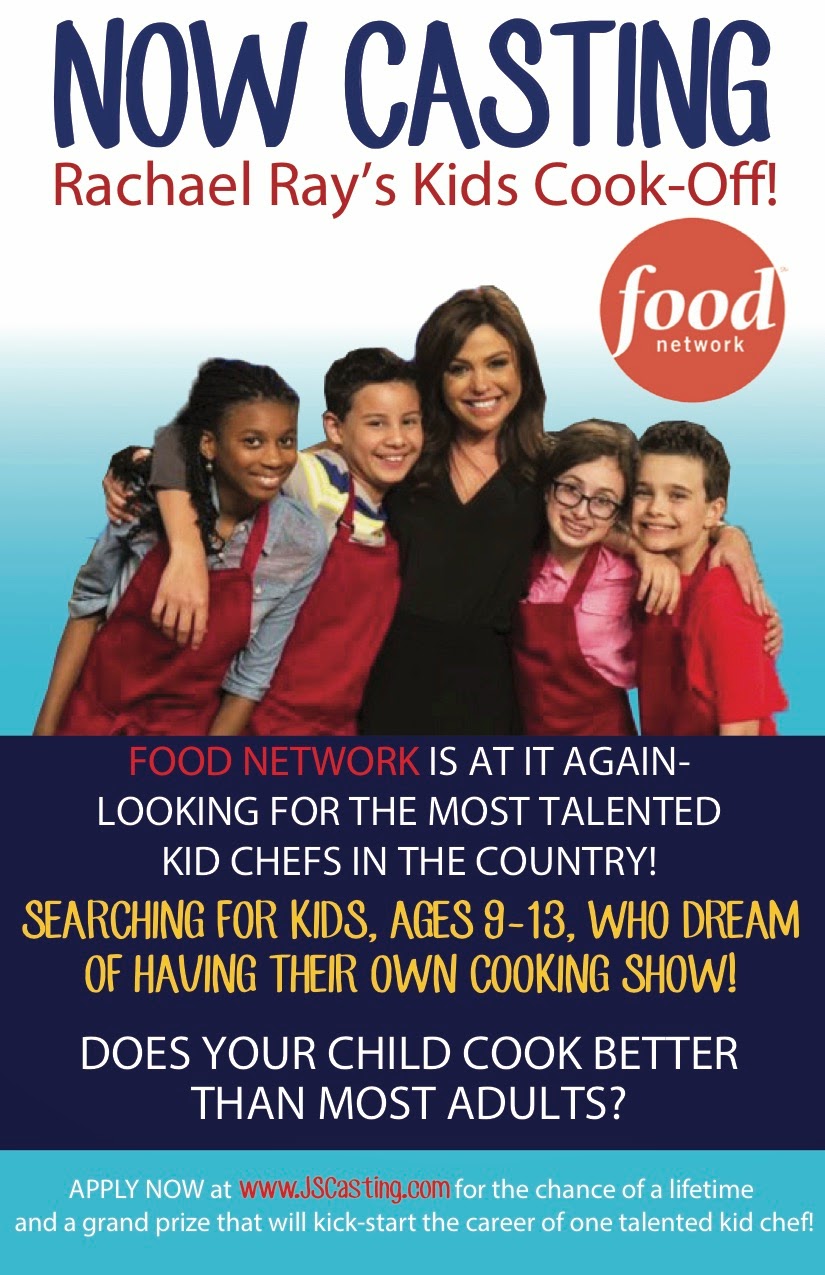 We are looking for kids with captivating personalities who believe they’re at the top of their culinary game and want to inspire a Food Network audience through their passion for food and cooking. The winner will receive a grand prize that will help to kick-start their culinary career!

For more information and how to apply, please visit our website at www.JSCasting.com. If you have any questions or require further information, please email us at KidsCookOffCasting@gmail.com

Like us on Facebook at JS Casting to stay up to date on our most current projects!
Posted by Jennifer Amero at 9:59 AM No comments: Links to this post

Julia has March Madness this weekend at her middle school. Each day has a different theme, a costumed theme, in addition to class spirit activities and competitions. It's a super fun positive vibrations part of the school year and a perfectly timed respite from test prepping, as standardized tests start very soon.

Naturally, costumed socialization was right in my 11yo's wheelhouse, and she was busy sketching out her plans as soon as the info dropped. I will never be justified in complaining about her eagerness to engage in theatrical pursuits. It's an apple/tree situation. Proof here Zombies, Prom Queens and One Eyed Sword Throwers

Anyway, she opted to be some sort of anime character, again, for character day. I don't follow anime, but I do know the character is from the show, "Homestuck Trolls", though I am not exactly sure WHAT a Homestuck Troll is. Here's the Wiki Link in case you are just dying to know: http://en.wikipedia.org/wiki/Homestuck Also these are them, right up above. Lots of horns and fangs and gray makeup.

I also knew that it would require a wig which we promptly ordered for only 6.29 on Amazon with free shipping on Amazon Prime, due in 3 days. I flatly rejected the plea for colored contacts. Julia is as enthusiastic as I am, and as thoroughly unrealistic. She is also broke.

The wig never came. A week went by, no wig. I worried if it had been stolen off my steps (we have a nasty issue with UPS thievery these days). Julia inquired, daily and grew more frustrated. Understand that to her, this is the most important thing to ever happen. Whatever she is excited about always is.

Finally and email announcing the item has shipped and will arrive --- 3 weeks after spirit week has come and gone. 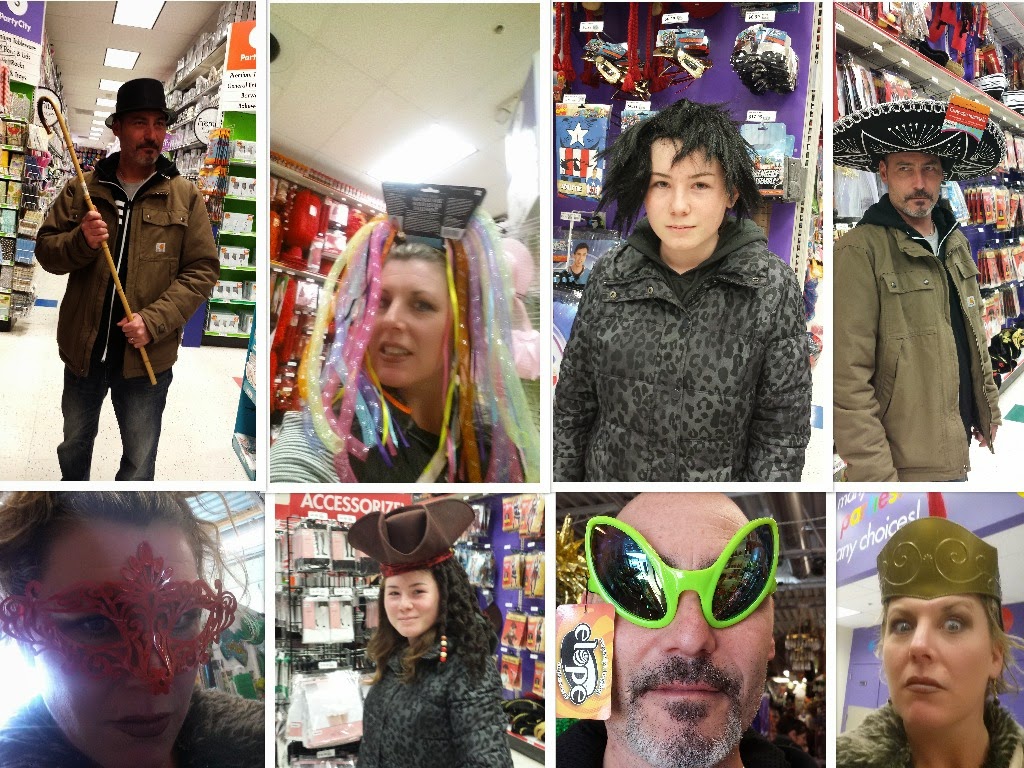 Not one to let her down, we rearranged the weekend plan to hunt down the missing piece. An emergency trip to Party City and then to Joker's Wild not only solved our problem, it made for a super hilarious family outing. And it didn't cost us anything, except what we paid for the wig. And lunch. Always find a way to include lunch.

Just thought I'd share in case you were out of ideas for things to do with the funwreckers after a very long winter. Fun, cheap and easy works for me and costume shop people don't get all freaky about kids and about touching the merch. So that's also cool.

Posted by Jennifer Amero at 11:47 AM No comments: Links to this post