Boats and Bevies and Film Crews, oh my! My night with Wicked Tuna 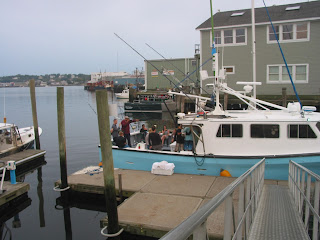 I spent Tuesday night hanging out with some of the fine folks from National Geographic Television's Wicked Tuna. If you aren't aware of the show, it's on National Geographic TV and features some of Gloucester's finest -5 boats of tuna fishermen - competing in a reality-TV style competition for the highest tuna catch and the highest cash yield from this monstrous and extremely lucrative fish. 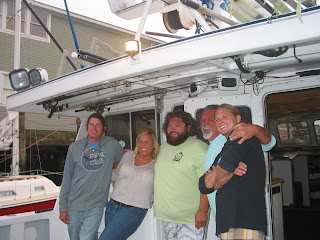 The catching part is hard but the "take" is well worth it. Fish yeild thousands of dollars apiece. This is a high stakes competition.

What makes the show so addictive is the recipe itself for good television - the drama of life at sea with a sprinkle of the gritty and the grandiose, lots of trash talking and hubris not uncommon among seafarers, and all the kick-butt cinematography you'd expect from a National Geographic production, on the water. 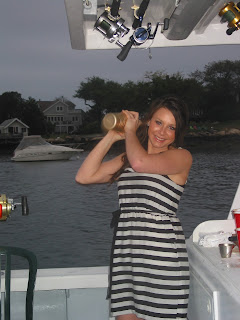 Plus, it's filmed here on my island and readers can catch a real sense of what island life is like for us salty folk - you'll understand our sense of community and work ethic,  and the unique blend of cultural, professional,and historical island pride that makes this place very, very special to live. PS cute hard working fishermen ;-)

The evening started with a meet up on the boat of a "rumored" addition to the show's cast of characters who treated media and distinguished guests from the pr firms of both Alchemy Bistro, part of the Serenitee Restaurant Group and Union Bar and Grill, part of the Aquataine Restaurant Group in Boston. The thread of the event was that the current exec chef at Alchemy is the former exec chef at Union. In addition to the VIP boat trip, we were headed to watch the opposing two chefs compete in a Wicked Tuna Throwdown to be held later that night at Alchemy. But first, boat drinks. 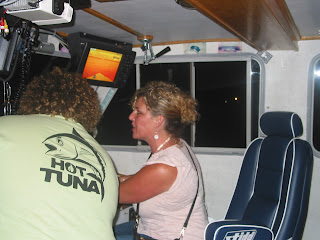 On board we shared more than a few laughs and goofy photo ops and a sampling of Alchemy Bistro's prize winning cocktail, "Wicked Good Time", made with locally distilled Ryan And Wood "Folly Cove Rum", which beautiful and talented mixologist Felicia Grossi prepped and poured for media, staff and crew. Crew members were warm, welcoming hosts and a lively time was had getting to know the guys, their girls, some of the folks from National Geographic and other press members invited to cover the evening. 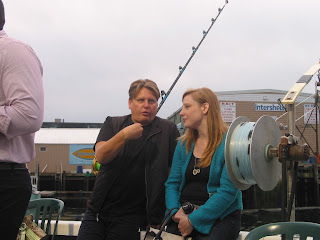 I was particularly pumped to get a chance to drive the boat and more pumped to see the cute lil Jerry Garcia doll on the dash. I have the same one. It's a deadhead thing and I felt a certain kinship and also much safer with "Jerry as my co-pilot" as I took the final turn at the wheel, bringing the boat back in to Fisherman's Wharf and St Peter's Square. I also enjoyed the opportunity to show off my inner townie boat chick and TJ and Tim from the crew found that quite funny, assuming I was just press, not local. Yeah, I live here. 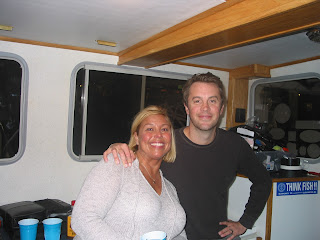 Sufficiently lubricated on Felicia's potent potion, yet with solid sea legs intact, we made our way onto the dock for the walk to Alchemy where we were met in the street by hordes of film folks handing out releases - we were gonna be on camera. Slight panic set in as I assessed my appearance. Too late to change up now, in I went, confident that the tight shots on the tuna boys would spare me any awkward thigh shots on national TV.

The evening was a frenzy of lights, camera, 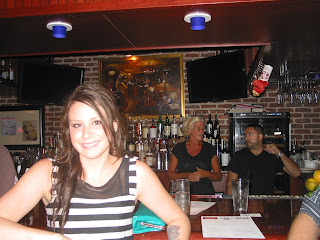 action hustle and bustle that surrounded the crew and though the chef showdown was reason we were all gathered, the presence of "Hollywood in action" really became all there was to take in. In fact, after a couple hours of watching the filming and schmoozing with locals and show folks, I caved in to hunger and went home to eat. Hangry Jen is not pretty and it was, after all, a school night.

The tuna, I hear, was to die for and it seems the local chef won. I'm sad I missed out but was very happy to have had the chance to see this all in action. It was really something -getting a chance to meet the stars and the production folks, the pr people and all the many players in making Wicked Tuna wicked good. 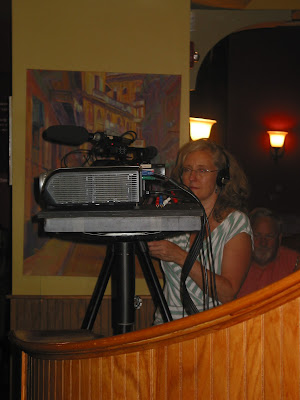 And the best part, I walked away with some cool new contacts, including the crew of Hot Tuna, Tim, TJ, Ryan, and Jared (who is a hoot AND will be a very fun addition next season, allegedly, of course) plus the wonderful Chad Sandhas from National Geographic, and writer Shelley Wigglesworth from Yankee Magazine, The York County Coast Star, The Maine Lobstermen's Association and National Fisherman
Magazine, both of whom where here for the event AND a day of tuna fishing the next morning. They got lucky, too - Chad sent me a pic of the tuna the crew caught, and humbly admitted he was merely an awestruck witness to the catch. Great folks, all of them. "Salt of the earth", as we say in Glosta.

I also left with the recipe for Felicia's cocktail. And I'm willing to share. It's below and it's "Wicked Good". All in all, I had a wicked good time with some wicked good folks. 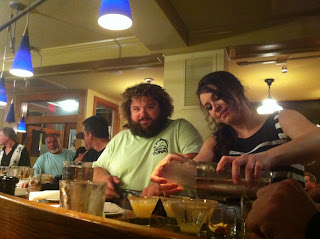 served up.
Posted by Jennifer Amero at 7:23 PM