I Hung out with Chef Jose Duarte of Taranta, by accident 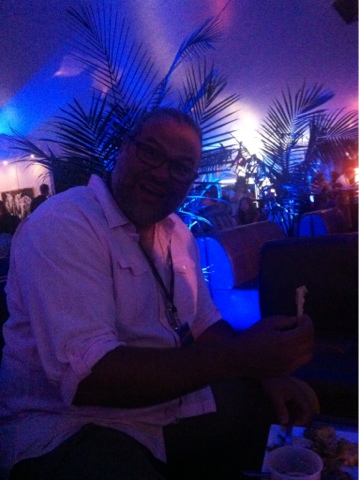 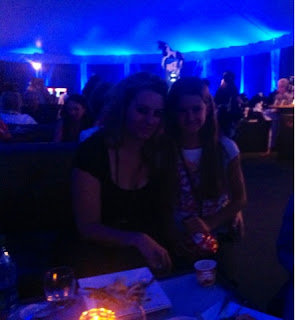 So last night, as a Social Media VIP guest, I was in the Rendezvous Lounge at Cavalia's Odysseo during the pre-show meal, and I found my daughter and myself without a proper seat. The place was packed. And, I gotta say, so hip.

As a mommy and an outgoing gal, I sought an open space where Julz would not be stuck making small talk with unknown media-focused grownups. I id'd an opportunity at a half-sat coffee table and settee where a mom and her boy were sat a midst discarded cocktail plates. There were extra seats, so I asked to sit and was invited, warmly, by the woman who introduced herself as Anna, and her son, Diego to join their family table.

After a few minutes of getting to know one another, I asked how the food was, gearing up to hit the buffet. Anna suggested I wait until her husband, a chef, returned to get his professional opinion.

"We own Taranta,": she replied. "Well Jose runs Taranta. I also own Trattoria San Pietro, on the South Shore".

"Wait, what? Taranta?", I burst, "As in THE Taranta in the North End? The Peruvian Italian Place?"

Just then, Jose Duarte and his daughter, Sophia, sat down to join us.

Within a few moments it became an every family everywhere kinda scene - their kids, Sophia and Diego were working on goofy faces for my iPhone camera, laughing with Julz. We talked schools and summer and the show. Regular parents. Regular people. Here for the horse show. Mom to mom - I owe Anna a recipe for San Giuseppe's Pasta - she's northern Italian and isn't familiar with this Sicilian fave. And she owns a trattoria. Holla.

And I got some one-on-one with one of the most brilliant, progressive men in checks a foodie/hippy/writer could encounter. If you aren't clear on who Jose is, do yourself, your belly and the planet a favor and LOOK HIM UP! We aren't just talking about an accomplished chef, two actually given Anna's own endeavors. Chef Jose Duarte is a leader in the food revolution. He speaks on NPR on sustainability He created an edible PR code. He is deeply involved in onsite mercury testing for safety levels in seafood. He is an adjunct professor and a major player in reshaping the food movement to clean up our tables. He's also speaking at Taste Trekkers (I'm already going) - the nation's first food-travel writer's conference.


This was truly a "90 seconds and velvet kind of moment". What an inspiring night. What a lucky girl am I. I seized the day or, ahem, a seat, anyway and had one of the most incredible encounters of my lifetime. I cannot wait to meet with him again. I've already reached out for an interview. There's so much I want to know.

For a quick bio on Chef Duarte click here: http://www.tarantarist.com/meet-the-chef/

Posted by Jennifer Amero at 6:11 AM