Super Bowl in New Orleans, it's all about the food

Today's the big day for football fans, though less a big deal for all of us up here in New England who won't be cheering our beloved Patriots on to Super Bowl victory.  Still, we will eat and drink in celebration of, well, a reason to eat and drink while the Baltimore Ravens take on the San Francisco 49ers in Superbowl 47 at the Mercedes-Benz Super Dome Arena in New Orleans, LA.

And what a perfect time for a big ole football game to come to NOLA, just a little over a week before the BIGGEST event in the Crescent City's calendar year, Mardi Gras.  It makes me happy to see this much tourist traffic and, more importantly, tourism dollars funneling into New Orleans as they continue to struggle to rebuild from Hurricane Katrina.
It'll surely help them out in a huge way.

I won't pretend to know (or really care) at all about football.  I'm in it for the wings and the beer, but this year the location will have me glued to the set for the pregame festivities with a bit of N'awlins style revelry that just may be more memorable than the much-anticipated Super Bowl commercials.

Why do I care so much about the choice of venue for Super Bowl? Because I love New Orleans. Because I care deeply about the people there who have suffered such tragedy from Katrina. And because I am involved in a drive to send some smart, cool kids to NOLA to help with the rebuilding. 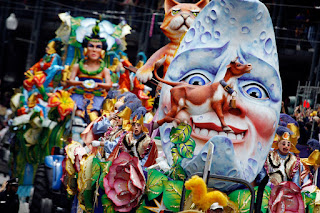 This week, I'm all about all things Cajun and costumed. As a planner and promoter of a couple of local Mardi Gras events (which fund the local YMCA Teens trip to NOLA), I'm spending a lot of time thinking about Fat Tuesday these days.  From helping to promote a concert with New Orleans' own Henri Smith and Grammy winner Charles Neville at the Larcom Theater in Beverly, MA on February 8th  to helping to plan the 4th annual Fat Tuesday event at Latitude 43 and Minglewood Tavern in Gloucester, MA, I'm up to my ears in beads and gumbo.


And speaking of gumbo, I think it's appropriate on this day of football feasting and in the next week of pre-lenten gluttony that is the very essence of Mardi Gras, to take a close look at the flavors of NOLA.


New Orleans cuisine is as extreme in flavor and color as it's people. Intensely hot, spicy, salty, rich, boozie or sweet, there is nothing mediocre about this stuff.  Just how I like it.

I visited New Orleans about a decade ago and though the eateries may have changed since then, the "Must Eats" certainly have not. Here's a crib sheet on what you've got to try if you ever make it to the French Quarter: Begniets - French for "doughnut", but hole-less and square and crispier than the American variety. If you try nothing else on this list, eat these.
Chickory Coffee - bitter, hearty, heart-racing stuff that is only palatable served as a foil to the sweet sticky begniets.  Get them at the Cafe Du Monde in Lafayette Square for some incredible people watching. 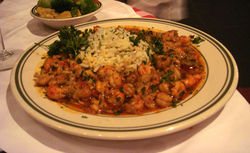 Étouffée or etouffee is a shellfish and rice dish with a spicy blond "roux" found in both Cajun and Creole cuisine, but vary in spicing and, therefore, flavor depending on which culture's etouffee you order. The name means, "smothered" in French and refers to the regional cooking technique employed in making this dish.
Gumbo - consisting primarily of a strongly-flavored stock, meat or shellfish, okra, and seasoning and what the Cajuns call the "holy trinity" of vegetables - celery, bell peppers and onions. The name of this dish is likely derived from either the Bantu word for okra (ki ngombo) or the Choctaw word for filé (kombo). Economically speaking, gumbo is a great way to feed a crowd and use up "leftovers" in this colorful stew.

Hurricanes - every 20-something college kid who makes the pilgrimage to party till you puke on Bourbon Street has suffered the aftermath of a Hurricane bender.  Sickly sweet and loaded with booze, every bar in town will serve these up in giant plastic souvenir glasses on the cheap.  Created by tavern owner Pat O'Brien as a way to utilize  poor local rum until he could get cases of scotch and whiskey, he poured the rum and juice mixture into a hurricane-lamp shaped glass and gave it away to sailors, who presumably suffered misery worse than death when returning to sea after a night of drinking them. 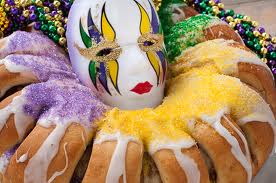 Jambalaya - a close cousin to the Spanish Pallella, Jambalaya finds it origin in the Caribbean dishes introduced by transplanted slaves and also varies based on Cajun or Creole preparation. Universally made with andouille (smoked) sausage and saffron (from the Spanish influence), the dish is made with trinity vegetables, rice and chicken and can be identified as Cajun or Creole by the use or absence of tomatoes among other things.


King Cake - served throughout the Carnival season, the cake has a small gift inside, often a small plastic baby, said to represent Baby Jesus. The person who gets the piece of cake with the trinket is entitled to various privileges and also obligations.
Mimosas - legend says that the Mimosa was invented at the Court of Two Sisters - the BEST spot for a giant brunch under a canopy of bayou verdant vines, and served up with great jazz.  Every dish you might want to sample from the local cuisine will be present on the buffet tables. Go hungry and plan nothing for after - you'll be in food coma. 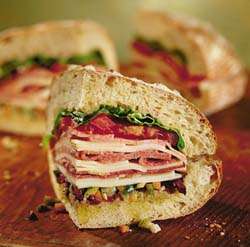 Muffeletta - think "hangover helper". Salty olive salad stuffed into an Italian cold cut sandwich served in crunchy bread, presumably designed by a young deli hand who'd dragged himself into work after a night in the French Quarter.  Buy two bottles of water with your order. Take your rings off before bed or have them cut off the next day from the swelling.

Pralines - candied pecan loveliness that'll rip your fillings out and get you a serious scolding from your dentist. Eat them in small doses or suffer a mother of a white sugar crash. 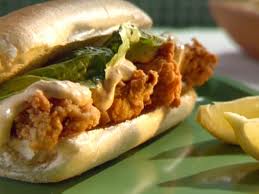 Po Boys - the Po'Boy sandwich varies about as widely as the costumes at Mardi Gras itself, from content to seasoning, but is essentially battered, fried seafood served on crusty bread with a creamy sauce. Common Po'Boy varietals include shrimp, oysters, cat fish and soft shelled crab. The origin of the name is deeply rooted in New Orleans history, beginning as a free meal served at a local venue to strikers in a battle over unfair treatment of workers installing NOLA's famous street cars.
"Here comes another poor boy" was heard as the workers lined up for a free meal during the struggle against the street car company. The tale is colorful and worth a read.  http://www.poboyfest.com/history
Hungry yet? Here's a link to a great recipe source with 50 or so Cajun and Creole regional dishes from authentic to diet. The first three listed are family cookbooks from Native Louisianans. I'd start there.http://www.gourmetsleuth.com/Directory/List/LouisianaCajun-222-0.aspx 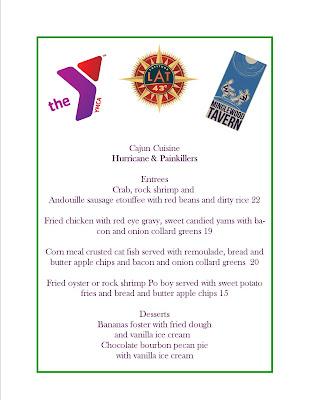 Not inclined to make it yourself?
Come to the February 12th Mardi Gras Event at Lat43 and Minglewood and try out their special Mardi Gras Menu. 10% of total sales for lunch, dinner and drinks will be donated to the Y Trip. Live music by the Runaround, goods and services raffle, 50/50 raffle, magic, facepainting and more.
978-281-0223 www.latfortythree.com

OR the February 8th Concert, and buy the VIP package, which includes a Cajun buffet by award-winning restaurant Chianti at the meet-the-artists pre-party in the grande salon before the show. Tickets on sale online at www.gimmelive.tv. and at Gloucester Music, Casa de Moda in Beverly and at the Cape Ann YMCA or call 978-525-9093
50% of profits will be donated the the Y Trip 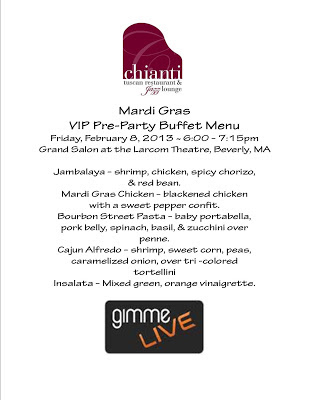 Posted by Jennifer Amero at 7:26 AM